I've promised myself (and my husband) that I will keep it short tonight. It's seven hours until post time, and here I am at the beginning of the page. I'll have to say what I mean in fewer words since I have less time.

Have you ever been pushing your buggy through Target (can I get a hearty A-men for Target?), trying to decide which checkout line to use, so you count up the things you have and then look for the sign that says "15 items or less" to make sure it's really 15 and not 10? Do you get aggravated that you have 16 items, or is the bad grammar what ruins your mood?

I've always wanted to whip out my Sharpie, cross out the word less, and replace it with fewer.

A couple of years ago, a new grocery store called Wegman's opened in my area. The hype surrounding it went on for months, until the entire region was in a food-based retail frenzy. Since I shop at a military commissary, I didn't pay a whole lot of attention to it, but when my neighbor raved about how wonderful the natural-foods section was, I decided to go check it out.

The store is enormous and has varieties of foods you can't find anywhere else around here, but what really thrilled me was this: 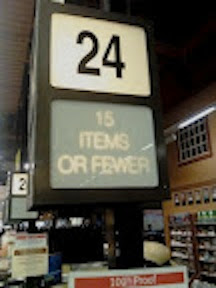 Be still my heart! Wegman's speaks my love language!

EVERY SINGLE SIGN that's ever been manufactured that says "15 items or less" (or 20 or 10 or whatever the magic number happens to be) is WRONG. Here's the rule:

Fewer — use fewer when you are talking about countable items: jelly beans, yachts, golden retrievers.

Less — use less when you are talking about a measurable quantity, something you can't count individually: coffee, money, pollen.

Another hint is that countable items are generally made plural (1 bean, 2 beans); you would use fewer with these. Measurable quantities are generally not made plural. You wouldn't say "coffees in the cup" or "pollens in the air." With these you use less.

Of course, if you wanted to argue, you could say that coffees is the plural of coffee, but what we're talking about there are types of coffee or cups of coffee (sometimes called coffees). It's important to think about what you mean, and speak accordingly.

And guess what. (Yes, that's supposed to be a period. Guess what is not a question; it's a command. That was a free mini-lesson.) There are a couple of exceptions. This is English, after all.

Of course, then you have the term monies, which refers to funds that come from different sources: I wouldn't have been able to pay my college tuition without the monies provided by friends and family. Monies are countable: fewer monies means you can't pay tuition.

So the next time you are in line at the grocery store or Walmart or Target and want to impress your line neighbor with your vast body of knowledge, tap him or her on the shoulder and say, "You know what? That sign should say 15 items or fewer. That word less is wrong there." And you will have done your part to help make the world a better place.

I love Target and Wegmans. I guess I've never thought about those two words. I'm glad you cleared this up for us.

I'm a little late reading these posts. I had never thought about the use of less and fewer. I will be paying more attention now.

Who's behind the keyboard? 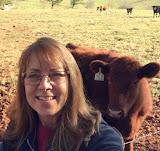